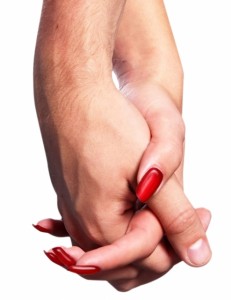 Not all nail polish is bad. (Check out Skin Deep’s Cosmetics Safety Database for safe choices, including some water-based, solvent-free options.) But just about all the toxic polish that’s on store shelves contains at least one of four dangerous ingredients: aluminum powder, dibutyl phthalate, toluene, and triphenyl phosphate. Here’s the scoop:

Dibutyl Phthalate
Dibutyl phthalate’s nasty – for one, it’s a phthalate. This ingredient is banned in the European Union and is a known human immune system toxicant and human respiratory toxicant. There’s strong evidence that it’s a human endocrine disruptor and neurotoxin, too. Particularly harmful to baby boys, dibutyl phthalate has been linked to birth defects in male reproductive systems.

Toluene
Speaking of nasty, toluene is a really hazardous, highly flammable chemical. An ingredient of paint thinner, the International Fragrance Association has deemed toluene unsafe for use in cosmetics – yet it’s still part of nail polishes sold in the United States. Toluene irritates skin, causes nausea, and impairs breathing. Vapors can cause dizziness and drowsiness – and if a pregnant mother inhales toluene’s vapors, her fetus may experience developmental damage. There’s also strong evidence that it’s a neurotoxin, a human developmental toxicant, and a human nervous system toxicant.

Triphenyl Phosphate
A plasticizer that is a known human immune system toxicant, triphenyl phosphate is included in nail polishes – there’s strong evidence that it’s a human neurotoxin, too.

Surprisingly, as long as nail polish is an acetone-free variety, it’s only a moderate hazard.

Eugenol
Also an ingredient in dangerous perfumes, eugenol is a natural and synthetic scent. It irritates skin, eyes, and lungs, is a known human immune system toxicant, and is linked to allergies and contact dermatitis.

Salicylic acid
Used in skin treatment products as a penetration enhancer, salicylic acid can either be a naturally occurring form or synthetically produced form of beta hydroxy acid. It’s restricted in both Canada and Japan, and accumulates as a body burden.

Triclosan
Triclosan’s also restricted in Canada and Japan – and it another chemical that adds to a person’s body burden. It’s an antibacterial component in many personal care products and irritates eyes, lungs, and skin. Studies also have proven that it disrupts hormones in a human’s endocrine system.