For children younger than three years old, a leading cause of death is choking. Choking is such a huge danger for infants and toddlers because they put everything in their mouths. Because of this tendency, the major choking causes for these young children are toys, balloons, food, and coins. 1Since choking is such a danger, it’s very important for parents to monitor what their children are putting in their mouths.

Dispose of toys that have cylindrical pieces – like toy nails or screws. And as a rule of thumb, don’t let children play with a cylindrical piece or a ball that’s less than two inches in diameter. 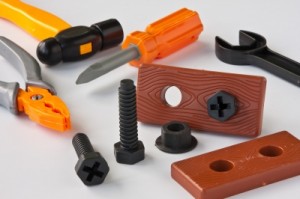 In 2006, Playskool voluntarily recalled more than 250,000 Team Talkin’ Tool Benches after a nineteen-month-old and a two-year-old both choked to death on the toy’s oversized plastic nails. 2

Once I read about the recall and imagined the horror of watching my child choke on a toy, I searched through my son’s toys, only to find similar toy nails and screws, as well as an assortment of small pieces. During his naptime I confiscated all the potential choke hazards. Later, he missed the tiny toys, but I didn’t care – he had plenty of other toys to play with, and his safety was much more important than his desire.

Swallowing other dangers
Choking on toys isn’t the only danger for children.

Swallowing a button battery – commonly found in toys, games, greeting cards, and light-up shoes – can be fatal. If a child swallows one of these small, coin-shaped batteries, it needs to be removed immediately. The batteries have the potential to lodge in a child’s esophagus or gastrointestinal tract. Swallowed batteries can create an electrical current when surrounded by moist tissue and create a harmful chemical with a high alkaline content – sodium hydroxide, also known as lye – when combined with bodily fluids. 3

Swallowing magnets that are part of many of today’s toys are dangerous, also. If a child swallows two or more magnets, they can attach in the child’s stomach or intestine and cause blockages and perforations. Because of this risk, children six years old and younger shouldn’t play with magnetic toys if at all possible.