Recently, I found an illustration on Facebook with the ironically funny caption, “Try organic food … or as your grandparents called it, ‘Food.’ ”If only this statement wasn’t so true! 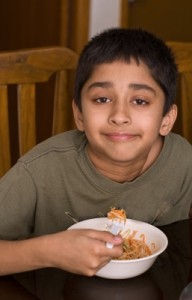 What’s the big deal about GMOs?
Eating organic is the only way to avoid this altered food. Unfortunately, GMOs are found in the majority of American foods – and there is no labeling mandated in the United States for GMOs to be identified on a product.The big deal about genetically modified organisms is that a food’s genetic makeup is altered.

A GMO includes genes from different organisms that are scientifically combined. (In plain English, it means a cucumber could include corn genes – or chickens could have turkey genes.)

Currently, food, medicines, vaccines, and fibers include GMOs – yet no testing has been done to investigate the health or environmental impacts of this cross-species gene splicing.

Despite the enormous problems that come with the ethics and health of genetic modification, laboratories are standing behind their products. These Frankenstein varieties have better yields. Plus, the crops and animals are more resistant to pests.1

Just because scientists have found a way to tinker with food doesn’t mean the food is better, though. It’s definitely not healthier. Because there’s no labeling system, consumers are unknowingly trapped into eating these freaky foods. The best way to avoid GMOs is by making wise (albeit costly) organic purchases.