Long before I was pregnant I knew I’d use cloth diapers, mainly because I didn’t feel right about putting a literal ton of my child’s dirty diapers in a landfill. When I tried to convince my husband about cloth diapering, the financial savings sold him right away. 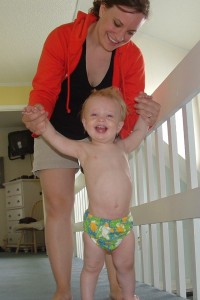 I researched a lot of the cloth diaper varieties – Prince Charming said he didn’t want to do the “origami” kind, but something that was as easy as disposables. I chose a one-size-fits-all pocket diaper, which means the diaper size can be adjusted for baby growth, and the diaper consists of an outer covering that’s waterproof and an inner absorbent liner. We bought twenty diapers for $300. People were shocked – “you’re paying how much per diaper!?” – but we had the last laugh. After figuring how much we would have paid in disposable diapers, our “expensive” cloth diapers paid for themselves by the time our son turned 6 months old. The Velcro and leg elastic on the cloth diapers started to wear a little after a year, but I didn’t even mind, knowing we hadn’t paid for diapers in several months.

When Big Brother got older and was still in cloth diapers, his nighttime wetting became a lot heavier. His diapers did start leaking, and I wasn’t sure what to do. Because parents can stuff pocket diapers with other absorbent layers, I simply started wrapping a normal prefold cloth diaper around his cloth diaper’s microfiber liner. Suddenly, he stayed dry for his ten to twelve hours of sleep each night.

Diapering Big Brother in cloth diapers did end up being beneficial for his health. One day while scrubbing his dirty infant diapers, I noticed something moving in the diaper. Horrified, I realized it was a worm. How in the world did my precious baby get worms? I didn’t know where or how he got them, but I knew that he was infected. The next day I was able to take him to the doctor and start a prescription to treat the creepy crawly buggers. If I had used disposables, I never would’ve had a reason to look at his feces – and who knows how long the worms would’ve been around.

Unfortunately, my cloth diapering experience didn’t work out according to my original plan. Shortly after my son turned 2, his cloth diapers started to leak – when puddles of urine appeared on the floor and I was busy with my infant daughter at the time, I switched to disposables. Even though I hated seeing the dirty diapers pile up in the trash can, at least they didn’t leak. Fortunately, he only used disposables for seven months before he was potty trained. (In theory, cloth diapers can help with earlier potty training, because a child can feel wet or dirty more easily. By 19 months of age, Big Brother told us when he had a wet or dirty diaper.)

We did buy new cloth pocket diapers for our daughter, and they leaked a lot more for her than they did for her brother. I’m not sure if it was a boy vs. girl mechanical issue, or a different type of cloth diaper. Regardless of the problem, we ended up using a combination of disposable diapers and cloth diapers with her – usually cloth diapers during the day and disposables at night. Because we used both varieties, her cloth diapers didn’t wear out as quickly as Big Brothers. (In fact, I haven’t noticed much wear and tear at all.)

As a diapering veteran, I know the benefits of disposables, but would rather strictly stick to cloth diapers. For one reason, they’re so soft. Just imagine how uncomfortable it must feel to wear paper underwear! Underwear is cloth for a reason – it’s just more comfortable. Wouldn’t a baby’s tender bottom also benefit from something so gentle? Cloth diapers also are easy to use and convenient – as long as I’m able to do my laundry, I never have to run to the store at odd hours to pick up diapers because they’re always at home.