As you may remember, my family’s been trying a Holmes air purifier and new aer1 high performance, disposable filter system.

After my long bout with pneumonia and strange, recurring odors in my new-old house (new to my family, but fifty years old) I was particularly excited to try the purifier with odor eliminator filters. 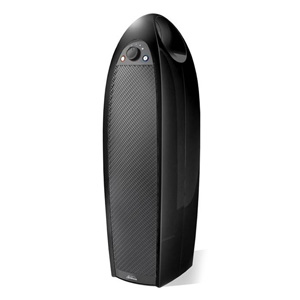 So did it work?

Like a charm. Sometimes I wondered if it was a combination of open windows, fresh air, and the purifier. (Are you participating in Accidentally Green’s Fresh Air Challenge? Remember to open your windows for at least 30 minutes today!) But then some times I just knew the air purifier was doing its job.

For instance, after we moved, the worst something-must-be-rotting odor filled Little Sister’s bedroom whenever I opened her window. We started running the air filter whenever her window was open, and the smell vanished within a half an hour. Without the filter running, the scent lingered. (And now, for whatever reason, the smell completely disappeared.)

We began moving the purifier to different rooms whenever we noticed smells – to the playroom for a little mustiness, to the kitchen for an odorific trash can, and to the living room when the air conditioning kicked on and filled the room with a wet dog odor. (Funny, we don’t own a dog. But the previous owners definitely did.) The smells quickly disappeared when the filter was turned on.

Beyond odors, I used the purifier during nights when I was suffering from a lingering pneumonia cough. I was sure I would wake up and need to make a doctor’s appointment, but each time I woke up feeling fine – and my cough was gone until later in the day.

Even with all of the great experiences, I still was skeptical that a small machine could be so powerful. But two weeks ago I became a true believer.

I spent a day priming and painting our children’s Book Nook and the room STUNK. I wanted to surprise Prince Charming with the project, and didn’t want the horrible new paint smell to be a dead giveaway. I began running the air purifier for hours during my paint job – and by the time the paint dried at the end of the day, there was not a trace of new paint smell. In fact, Prince Charming never guessed that I had spent my day painting.

How it works
So how does a Holmes air purifier and aer1 filter work?

HEPA-type filtration removes 99 percent of airborne pollutants like dust, mold, pet dander, pollen, and smoke. Those pollutants are exactly what makes indoor air so much more polluted than outdoor air.

Aside from removing the pollutants, an activated charcoal filter absorbs and removes odors.

And, an ionizing feature creates negative ions that bind with dust, pollen, and smoke – this forms larger particles that are quickly captured by the machine.

The purifier has three settings and sounds like a fan when it’s turned on the highest setting.


Today I’m linking up with: