As much as any mother can prepare for childbirth, one thing that’s certain is that birth is so uncertain. Every birth story is different, and it’s often encouraging to hear how other parents managed their unique circumstances. My own two experiences were very different, yet both were filled with surprises and compromises – I’ll share both of them today and tomorrow. 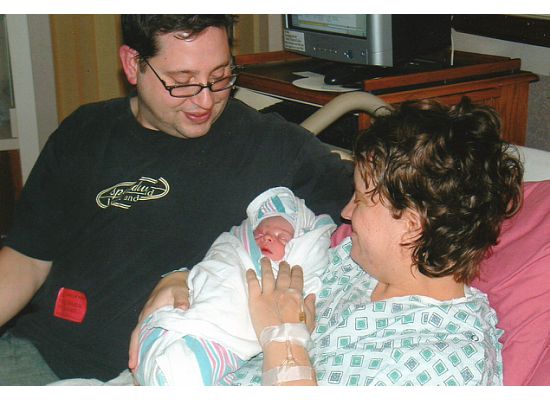 With our first child, my due date came and went. Two days after – while sleeping – I opened my eyes at 2:42 a.m., looked at the clock and thought, “My water is breaking.” I don’t know how I knew, but I told Prince Charming, “Wake up! Our baby is coming today!”

Then, with a gush, my water did break. Fortunately, we put a plastic paint drop cloth and towels under our sheets; suddenly, being annoyed with sleeping on crinkly plastic for a month wasn’t so bad because our mattress was saved. I never had any idea there would be so much amniotic fluid.

Our obstetrician instructed us to go to the hospital right away, and at 3:30 a.m., we calmly walked into the emergency room; there was no frantic scene like movies often depict. The receptionist was surprised I didn’t want a wheelchair, but I chose to walk to the maternity unit. I wanted gravity to help bring the baby down as much as possible.

Since I wasn’t having any contractions, I was told I would need Pitocin to jumpstart things. Already our birth plan was not working.

I was concerned that Pitocin would make my contractions too intense to get through naturally, but a Cesarean section was mentioned as an alternative if my contractions didn’t start so I willingly gave in to a drug-induced labor.

Because I was given Pitocin, I was hooked up to an IV and pole, and two fetal heart monitors were wrapped around my belly. I was wired in two different directions and was frustrated that I wouldn’t have much freedom to move around during labor.

At 7 a.m. there was a nursing shift change, and Prince Charming and I met our nurse for the rest of the birthing process. She truly was an answered prayer. I can’t remember how many nights I prayed for a labor and delivery nurse that would understand my desire for a natural birth and also be able to help me.

The mother of four, my nurse told me how she had her 5-month-old naturally. She quickly became our advocate, as all the doctors who visited wanted to do most things we had NOT requested in our birth plan. She stuck up for us, though, and found different ways to get good results. She increased the Pitocin gradually, and by noon I started feeling actual contractions.

My obstetrician came to check on me around that time and said I had dilated to three centimeters and could have an epidural at any time. When I said I didn’t want an epidural, she looked shocked and laughed at the idea. While my nurse respected my doctor, she later assured me I really could do it – and I believed I could.

Since my contractions started picking up in closeness and intensity, Prince Charming and I got to work on our relaxation techniques. I tried changing positions by walking, leaning on Prince Charming, and rocking and bouncing on a birthing ball, both to get comfortable and to let gravity work. I got to the point, though, of being most comfortable lying on my side in bed. Prince Charming tried to get me to relax through each contraction.

At first, it wasn’t bad, but then there was more and more pain. With many contractions, I would say, “It hurts!!!” while trying to completely relax my body – then the contraction would stop and I’d feel fine. When the contractions began to get really intense, I actually fell asleep between each one and had vivid, crazy dreams, then woke up to work through each contraction. As soon as each would pass, I’d fall back asleep. It was very strange, but it helped me get through everything.

When my nurse heard my pain level was a ten, she checked and saw I was seven centimeters dilated. I was ready to enter the transition stage, the most taxing and tiring part of labor. Afraid I couldn’t make it another three centimeters on my own, I asked if I could use the room’s birthing tub; she checked with my doctor and was given the OK.

Once the tub was filled, I was able to get in. It took away my discomfort right away, and I was able to rest immersed in water for the entire transition period while Prince Charming fed me ice chips and my nurse quietly encouraged me through each contraction. Only three or four contractions during this time were painful; I could feel the others, but they were nothing to complain about.

By nine centimeters, I got out of the tub. On the monitors, the baby’s heart rate was erratic, and the hospital staff wanted to give me an internal fetal monitoring device – something we hadn’t wanted in our birth plan due to a possible risk of infection. But at this stage in labor and with the level of concern, we agreed to it right away. The monitoring did show that something was wrong with the baby’s heart. When my doctor came in to see everything around 5 p.m., she was very alarmed and changed into scrubs right away.

Even though I dilated to ten centimeters and made it to the pushing stage, I felt no urge to push. I had to because of the baby’s heart rate, though, and as I started, I did it all wrong. I was given an oxygen mask and still told to push; finally I figured out how to do it by not holding anything back. Quite honestly, I just pushed like I had to poop.

The baby’s heart rate still was fluctuating, and there was talk about performing a last-minute Cesarean if the baby went into distress. Everyone in the room – Prince Charming, my nurse, the doctor, resident, and about four other nurses – started yelling at me to push. It’s a good thing I’m a born people pleaser, because when I saw everyone’s faces and heard their commanding screams, I PUSHED HARD about four or five times. And that baby came out.

Once the baby was born, everyone discovered the heart rate mystery. The umbilical cord was wrapped around the baby’s neck – tightly – three times. The doctor and nurses cut it off and the baby was OK. I could see its beautiful face, even in the midst of all the panic. There was so much commotion that no one announced what the baby was. I had to ask Prince Charming, and he told me it was a boy. Our son was born at 5:21 p.m., weighing six pounds, twelve ounces, and measuring twenty inches long.

When Big Brother was out, he was whisked across the room for a bunch of tests and evaluations. The rest of the delivery (placenta and stitching me from a last-minute episiotomy) was very quick, and I really didn’t feel much. The doctor said she was surprised at my pushing ability and quickness, and that if I’d had an epidural, the baby would’ve been born by a Cesarean section.

Our first night in the hospital, I couldn’t fall asleep. Big Brother was wide-eyed and peaceful and I just had to hold him and take in the beauty of everything, from his lovely new baby smell to the amazing sounds of his little coos and his precious face.

The next day, Prince Charming and I recalled details about the labor and he asked me if I would deliver naturally all over again.

In the big scheme of things, I had five hours of painful laboring, but part of that could have been attributed to the Pitocin-induced contractions. Feeling the baby crown hadn’t even been painful, just kind of sensational – and I was glad to have known the moment he entered the world. Afterwards, I felt fine – in fact, I only took six prescription-strength Motrin during my entire post-partum healing to help with the uncomfortable episiotomy stitches.

After weighing everything, my answer was a definite yes. I’m so thankful I had the opportunity to experience a fairly drug-free childbirth.