Two years ago, I wrote about how toxic many artificial hair dyes were. At the time, many shampoos and hair styling products also were made with less than desirable ingredients.

When I recently discovered that shampoos and hair products have changed (many are now safe!) I had high hopes for hair dyes. 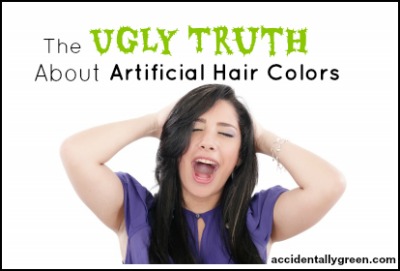 I’m sorry to be the bearer of bad news, but hair dyes are still one of the most toxic personal care products on the market. You can check out the Environmental Working Group’s Cosmetics Database for yourself: out of 234 hair dyes tested, 103 are considered as high hazards.

On a scale of 1 to 10  with10 being the absolutely most hazardous products:

Readers, that means nearly half of all artificial hair dyes are ranked as high hazards.

What’s the fuss?
So what are the toxic chemicals that cause so much concern?

While it’s a common ingredient in hair dyes, it’s banned in Japan and is known to irritate skin. The U.S. government has limited the amount of resorcinol used in the workplace, but there are no limits for private use – and no limits in personal care products.

P-phenylenediamine is used in many hair dyes, but it’s restricted in Canadian and European cosmetics and irritates skin, eyes, and lungs.

P-aminophenol is one of the byproducts of coal tar, a thick liquid byproduct of bituminous coal distillation that contains toxic impurities. Coal tar is a known human carcinogen used in over-the-counter drugs – and hair dyes – that adds to a person’s body burden.

1-naphthol
There’s strong evidence that 1-naphthol is a human skin toxicant, and in animal studies it affects the brain, endocrine system, nervous system, and reproduction. The ingredient irritates lungs, skin and eyes.

Lead Acetate
Two products in particular, Youthair Crème and Grecian Plus, contain lead acetate. This toxic ingredient is banned from use in cosmetics by the U.S. Food and Drug Administration. Lead acetate is a known human reproductive toxin and known human development toxin. (It’s lead, after all.)

Looking on the bright side
Just because half of hair dyes tested are hazardous to your health, half aren’t so terrible. If you color your hair, please check the Cosmetics Database. How does your hair color rank?

Today, I’m linking up with: