My son is all boy. From the moment he wakes up until his head hits the pillow at bedtime, he is running. Or jumping. Or climbing. He’s on the go and has more energy than my husband and I combined.

He’s always been like this. Throughout my pregnancy, he was one wiggly, kicky little baby. And he was a squirmy newborn, an early crawler and was walking before he turned 1. While it may be a little tiring to try to keep up with him, I’m used to his high energy levels by now. 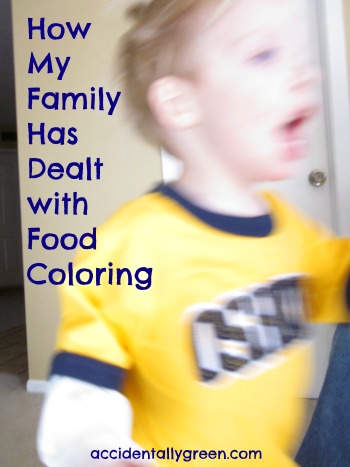 Sometimes, though, all of his energy seems to take an excessive, aggressive turn. It’s been happening since he was 18 months old, and at first Prince Charming and I thought it had to do with his age. We watched Big Brother’s cheerful, energetic disposition turn aggressive – including violently and repeatedly banging his head against anything. Even concrete. We suspected something was wrong, and as his forehead began to turn deeper shades of purple with every head banging episode, we longed to help him.

I stumbled across online testimonies about other children with the same problems, but they improved when the natural food color annatto was removed from their diets. I ran to our pantry and refrigerator to search for annatto in our foods – and sure enough, the cheesy crackers we had given Big Brother for occasional snacks contained annatto, as well as the orange cheese he regularly ate and some ice pops. In an attempt to curb his extreme behavior, I threw out everything containing annatto or Red No. 40.

From that night on, the only major changes we made as a family were reading labels on food before buying, eating white cheese instead of orange cheese, sticking to fresh foods, and watching what kind of vitamins we give him. (While many vitamins include artificial colors, most naturally colored vitamins include annatto.) Surprisingly enough, those small changes have helped Big Brother change back to his normal self.

When I’ve mentioned the topic to our pediatricians throughout the years, they’ve dismissed my concern like it’s highly unlikely. I know my son, though. And I know how he acts when he does eat artificially colored foods – he’s crazed. Throw just a little bit of annatto in, and within a day or two he’s back to spazzing out and repeatedly banging his head.

For me, I don’t care what the FDA decided last week, or even what my pediatricians say about the issue. I know my son has major behavior issues when he consumes artificial colors and annatto. When they’re removed from his diet, he’s a pleasant little boy filled with energy. Does he have occasional temper tantrums? Of course. He’s 3. But they’re manageable – not alarming.

Is your child sensitive to food coloring? What steps have you taken to help him or her?