Flame retardants may have a deadly side effect in children: the presence of flame retardants in crib mattresses have been linked as a cause of Sudden Infant Death Syndrome. As the number one cause of death in children twelve months old and younger, SIDS kills an average of 2,500 infants each year.1 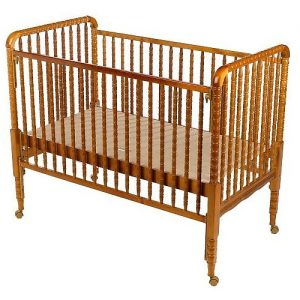 Crib mattresses are made of vinyl and polyurethane foam, and are filled with toxic chemical additives like flame retardants phosphorus, arsenic, and antimony. The mattresses are then covered with polyvinyl chloride (PVC) which is one of the most toxic plastics used. Phthalates are used to soften the hard plastic, but are not bound to the vinyl – so they leach out of the mattress and into the environment.2

Sprott’s theory about the gases’ link to SIDS makes a lot of sense: typically when a baby starts sleeping on a mattress, a fungus begins growing. The fungus and flame retardants phosphorus, arsenic and antimony react to each other and form the toxic nerve gases phosphine, arsine, and stibine. Since these gases are toxic, they have the potential to kill.

Once a sleeping baby inhales the poisonous gases, the enzyme cholinesterase is deactivated – this enzyme is vital to the nervous system, and deactivating it causes the lungs to stop breathing, the heart to stop beating, and death to occur. Because SIDS deaths are never caused by visible culprits, a gaseous poisoning is probable.3

The “Back to Sleep” campaign has been so effective in preventing SIDS deaths because SIDS is more common when infants sleep on their stomachs and an infant is face down on the mattress – close enough to inhale the toxic nerve gases. When babies are put on their backs to sleep, the fresh air around their upturned faces diffuses the poisonous gases.

A couple situations make fungus grow quicker on a crib mattress: dampness (either from urine or sweat) and heat. As a typical SIDS precaution, parents are advised to avoid overdressing or overheating their children while sleeping – statistically, more SIDS deaths happen in the winter when babies are dressed in warmer clothing. Babies who are too warm create a lot of heat and sweat, speeding up the fungus and toxic gas scenario.

Infants who have been recently vaccinated also are at a greater risk from SIDS – perhaps this is because vaccines often cause fevers, which in turn creates warm, sweaty babies.4

Other scientists have proven a link between SIDS and toxic gas poisoning, yet SIDS organizations in the United States discredit the theory.

Sprott launched a successful campaign in New Zealand that has stopped crib death. Check back tomorrow to read more about it – and learn how babies can be protected from SIDS.