Have you ever wondered if there’s a difference between fruit flies and gnats? There is – but it’s visually difficult to see.

Gnats, on the other hand, are smaller, black insects that are attracted to moist places like bodies of water, damp sink drains, garbage cans, and moist houseplant soil.

Both fruit flies and gnats are attracted to light.

Knowing how the two flying insects are different is important when it comes to treatment. Once you know if fruit flies or gnats have invaded your space, it’s easy to eliminate their main attraction. 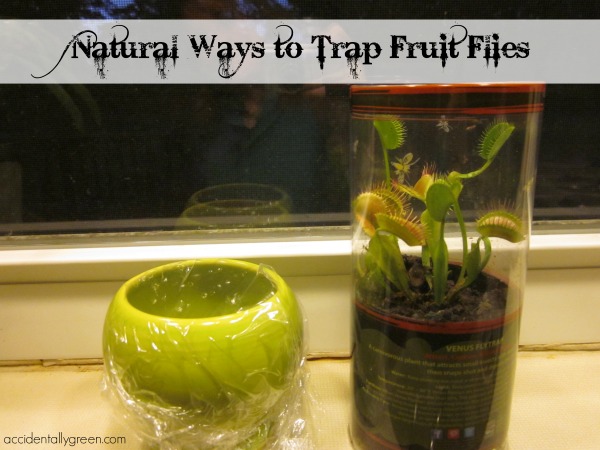 This fall, I’ve had terrible fruit fly problems in my kitchen. My children picked a large bowl of ripe tomatoes that I didn’t have a chance to wash and freeze – so the bowl sat on my kitchen counter beside our sink. In a day or two, I noticed dozens (if not hundreds) of fruit flies lingering in my kitchen.

As I stood at my kitchen sink to wash dishes, I couldn’t help but stare at them. One day in particular, it looked like all their eggs must have hatched, because there were more than ever.

Thoroughly disgusted, I was ready to try any natural remedy. I found that with that many fruit flies, I could smash a bunch with my fly swatter. But the rest needed trapped. Here’s what I did:

I covered up all fruit and vegetables.

After noticing my kitchen countertops, I saw ripe tomatoes, peppers, and bananas all sitting out. I thoroughly washed, cut and froze my tomatoes and peppers. And I peeled the bananas and stored them in a resealable bag in the freezer so I can use them for baking in the future.

Once the fruit was gone, there wasn’t any sort of sweet attraction for the fruit flies. But they were all still hanging around.

I kept my dishes washed.

At the time I wasn’t sure if they were fruit flies or gnats, so I tried to eliminate any kind of standing water or dirtiness in my kitchen by hand washing my dishes as soon as possible. (Unfortunately I don’t have a dishwasher.) Once I drained the water from the sink, I washed my kitchen sink out to get rid of any kind of potentially attractive food residue.

I thoughtfully kept my window open – and shut.

The fruit flies were still in my kitchen – with nowhere to go. I noticed that they swarmed the window above my sink, so in the day I left the window open for some fresh air and the miraculous chance that they might find a way to fly outside.

Once the sun went down – or whenever I turned on the light above my sink – I shut the window. I didn’t want to draw any other bugs with the light.

I experimented with homemade traps.

The fruit flies weren’t dying off, and they weren’t disappearing on their own. So I started experimenting to see what homemade fruit fly traps were most effective.

I bought a Venus Flytrap, but as far as I could tell it only ate one fruit fly during the heaviest infestation. I even tried to lure the fruit flies into the Flytrap by placing a very small chunk of banana in the soil. The bugs had a heyday walking all over the Flytrap – just not on the plant’s triggers.

I was ready with my scientific method – I had a purpose, hypothesis, and materials. My procedure was to place all the traps on the window sill above my sink in the kitchen.

And my results? They surprised me. I found that more fruit flies were attracted to the apple cider vinegar in the light yellow bowl than the navy bowl – probably three or four to one.

Yet many more fruit flies were attracted to the banana in the bowl. The only problem was that while the apple cider vinegar trap killed the fruit flies, the insects stayed alive (and probably relatively happy) in the banana trap. After all, they could feed on the banana as much as they wanted. I ended up taking the trap outside, dumping the banana and setting the fruit flies free.

My conclusion? Stick to the banana trap. Even though you need to empty it every day, it won’t add the smell of cider vinegar to your kitchen. Plus, it’s more effective. And when getting rid of fruit flies, I want something as effective as possible.

How do you like to get rid of fruit flies at your home?

This post has been shared at Nourishing Joy , Time Warp Wife and Women Living Well.